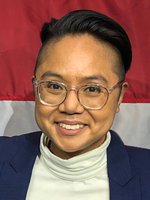 In 2019, AC was named a NYC/WorldPride Community Hero by Heritage of Pride, during the 50th anniversary year of the Stonewall Uprising. They were recently seen at The Wing for an advance screening/talkback with Lisa Ling for the CNN Original Series’ episode “This is Life with Lisa Ling: Gender Fluidity.” Their non-binary advocacy work and words have been featured by ABC News Live, NBC Asian America, Allure, The Huffington Post, The Advocate, Business Insider, Vice Media, and more.They've received honors by Parity and the New York State Comptroller.  AC graduated from Vassar College, and resides in Brooklyn, New York.