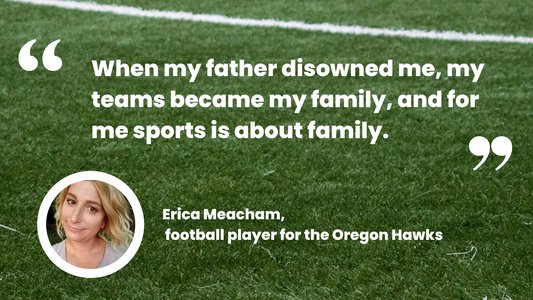 CHICAGO – Today, eight transgender women athletes filed a friend of the court brief with the Seventh Circuit Court of Appeals in A.M. v. Indiana challenging Indiana’s transgender sports ban, House Enrolled Act (HEA) 1041. The athletes, who vary in age, sport, geography and level of competition, include well-known athletes Hailey Davidson and Kayla Ward. All speak to the profound personal, social, and emotional strength they have gained through sports.

“Virtually every athletic regulatory body including the NCAA, World Athletics, and the International Olympic Committee has had policies in place for years that allow for transgender people to participate fairly. All athletes benefit from inclusive and supportive policies that incentivize the development of critical life skills,” said David Brown, Legal Director for the Transgender Legal Defense and Education Fund (TLDEF) which filed the brief on behalf of the athletes along with co-counsel Mayer Brown LLP. “What we are seeing with this law and similar laws across the country is yet another attempt to politicize trans lives and fearmonger to win elections, with absolutely no regard for reality or the devastating impacts these laws have on transgender young people.”

The amicus curiae brief was filed in the lawsuit brought by the American Civil Liberties Union of Indiana on behalf of A.M., a 10 -year-old girl who plays on her school’s all-girls softball team. HEA 1041 would deny A.M. the ability to play with her team because she is a transgender girl. The Indiana legislature previously overrode Governor Holcomb’s veto of HEA 1041, despite similar laws having been blocked or temporarily enjoined in other states. According to the complaint filed in the lawsuit, playing softball has helped A.M. to more fully experience her life as a girl. Not allowing her to do so in the fall would be a painful, constant reminder that she is not accepted by the world as the girl that she is.

“As demonstrated by amici’s personal stories, transgender athletes’ ability to access the same opportunities that sports provide to their cisgender (non-transgender) peers depends on their ability to participate in accordance with their gender identity. Transgender amici who participated in sports with policies that respected their gender identity excelled socially and personally, were able to develop critical skills that carried over to their personal lives and development, and built strong relationships with their teammates and competitors, which in turn furthered understanding, acceptance, teamwork, and inclusivity,” states the brief. " In contrast, when amici were excluded from sports or discriminated against in their respective sports, they often suffered social, emotional, and physical harm.

A decision in the case is expected sometime next year.

Athletes included in the brief are:

Hailey Davidson is a professional golfer living in Kissimmee, Florida.  She started playing golf with her dad when she was ten or eleven and it quickly became her world.  She loved that it was an individual sport with “no pressure of needing to fit in with teammates” or dealing with “outside influence,” which was particularly helpful to Hailey before she came out.  Hailey says that golf is “what kept me alive” when she was coming out and “I don’t know if I’d still be here without it.”

Grace, is a rugby player in Brooklyn, New York. Grace has played a variety of sports for most of her life, ranging from ice hockey to soccer, basketball, baseball, ultimate Frisbee, and, most recently, rugby. She moved to the San Francisco area approximately six years ago, and, shortly thereafter, came out as transgender. Grace started playing rugby only four years ago, but has fallen in love with the sport and since played on three teams: the San Francisco Golden Gate Women’s Rugby Club, the Berkeley All Blues, and now the New York Rugby Club.

Jamie is a female softball player in Las Vegas, Nevada. In approximately 2015, Jamie came out as transgender and soon started HRT. At first, Jamie thought she would not be able to participate in competitive sports again, which was deeply upsetting. Jamie reports that every meaningful relationship she has had in her entire life outside of family has been directly impacted by playing sports together or watching sports. It’s a camaraderie that is unlike anything she’s ever experienced. She says that there is nothing like people cheering and being impressed by the feats you’re able to accomplish athletically. Nevertheless, her transition and living as her authentic self were necessary for her personal and mental health. Fortunately, she soon learned about tournament level softball governed by organizations such as United States Specialty Sports Association (“USSSA”). Fortunately, the league has an inclusive policy for transgender players and Jamie joined a tournament team after being asked to by a friend. She says playing sports with women in her authentic gender has been the greatest athletic feat of her life. She has gained incomparable confidence and freedom by being able to play as her true self, without barriers; her playing ability increased; the depression and self-hatred she had suffered through years of isolation and hiding her identity decreased; and her friendships and relationships flourished.

Kayla is a model, actress, real estate agent, and lifelong basketball player who, until recently, aimed to be the first openly trans player in the WNBA. She has played basketball for as long as [she] can remember, since “like 3 or 4 years old,” mostly in recreational leagues and church leagues. Passionate about sports, she also played football, softball, volleyball, and tennis over the years.  She now plays in a LGBTQ+ “women’s plus” league in southern California that welcomes nonbinary people as well as cis and trans women. Throughout Kayla’s life, basketball has been a way for her “to connect with other people who share our interests,” “learning things like teamwork and social skills” – “it was pretty much everything to me.” Nowadays, a policy forbidding her from playing women’s basketball “would be devastating,” as her league offers “an opportunity to get together and do what [we] love” in “a safer space.”

Amelia is a runner in New Jersey. She explains that she never ran as a child, and in fact disliked being forced to run the mile in physical education class twice a year. However, after college, Amelia began running as a way to relieve stress, process emotions, and better herself. To her surprise, she found great peace in running, came to love it, and started participating in endurance races such as marathons.

In 2013, Amelia came out as transgender and started HRT. Given transgender-inclusive policies in much of the world of competitive running, Amelia was able to participate as the woman she is. Fortunately, she has received a warm reception in the sport and, for the most part, the fact that she happens to be transgender has not been an issue.

Erica is a female football player for the Oregon Hawks, a professional women’s tackle football team. Erica recalls feeling upset because “I thought I was done with sports after transitioning because of the stigma” placed upon transgender athletes but knew that living as the woman she always has been was critical to her well-being so “made peace” with it. However, after starting HRT and proceeding through her transition, she realized just how extensive the changes to her body were as she went through that process. As Erica put it: “It gave me hope to play again.” After playing on several slow pitch softball teams, including a women’s team at the suggestion of a friend, Erica realized she needed sports and that they were central to her human experience. “When my father disowned me,” she recalls, “my teams became my family, and for me sports is about family.” Sports gave her strength and the confidence to be herself.

Chloe Anderson previously played NCAA volleyball and participated on a women’s crew (rowing) team at college at University of California, Irvine. Sports have always been important in Chloe’s life, and she naturally gravitated to volleyball. Unfortunately, while the NCAA policy itself allowed for Chloe’s participation on a women’s team, the lack of a supportive environment caused serious and lasting harm to Chloe — harms that she has only recently been able to overcome, including through her participation in other sports.

Jamie O’Neill is a softball and professional golf long drive competitor in San Antonio, Texas. Jamie has always been passionate about sports, playing everything from field hockey to cricket as a kid. As someone who did not come out until adulthood, Jamie struggled for years with her need to transition. She felt like she was “dying inside and no one knew.” So, in 2010, Jamie made the decision to begin her transition because, though she feared it might cause the loss of family, friends, and her career, Jamie “knew that I was not going to lose [my] life.”

Read the amicus brief at: Brief of Transgender Women Athletes as Amici Curiae in Support of Plaintiff-Appellee